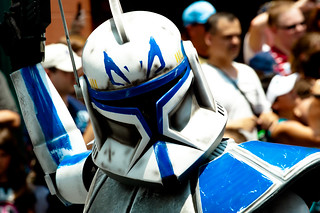 1. The Riddle of Princess Leia's message

This one is easy. This isn't a riddle for the audience as much as it is for Luke. In the beginning of the first movie, episode IV, Princess Leia gives R2D2 a video message to give to Obi Wan Kenobi. This is one of the greatest moments in all of the Star Wars movies because it is when Luke begins his journey to becoming a Jedi. He is met with the riddle when he purchases R2D2 and C3P0 from some Jawas passing through. While he is tinkering with R2D2 the message Leia left starts to play:

General Kenobi. Years ago, you served my father in the Clone Wars. Now he begs you to help him in his struggle against the Empire. I regret that I am unable to present my father's request to you in person, but my ship has fallen under attack and I'm afraid my mission to bring you to Alderaan has failed. I have placed information vital to the survival of the Rebellion into the memory systems of this R2 unit. My father will know how to retrieve it. You must see this droid safely delivered to him on Alderaan. This is our most desperate hour. Help me, Obi-Wan Kenobi. You're my only hope.

Who is she looking for?

2. The Riddle of immortality through the force

Throughout the movies we see ghost-like figures of Jedi's that have past away. What is up with that? And at the end of the third movie we hear Yoda tell Obi-Wan that Qui-Gon has found a path to immortality. Is he a zombie?

In episode II Obi-Wan is looking for a planet and he goes to Yoda, who is working with padawan, and he discusses it with yoda. The planet is later found to be harboring the clone army. What happened to the missing planet?

4. Why does Yoda talk so oddly?

1. Once Luke hears this he becomes intrigued and goes on his journey, eventually discovering that Old Ben Kenobi is the one she was looking for.

2. When they refer to this 'path to immortality' they are referring to this ghost-like existence. When they achieve this type of existence they have become one with the force, and in this way, one with the universe.

OBI-WAN
I'm looking for a planet described
to me by an old friend. I trust
him. But the system doesn't show
up on the archive maps.

YODA
An interesting puzzle. Gather round the map reader, younglings. Master Obi-Wan has lost a planet. Find it, we will try...

The map reader is a small shaft with a hollow opening at the top. The CHILDREN gather around it. OBI-WAN takes out a little glass ball and places it into the bowl. The window shades close darkening the room and the reader lights up, projecting the star map hologram into the room. The CHILDREN laugh. Some of them reach up to try and touch the nebulae and stars. OBI-WAN walks into the display.

OBI-WAN
This is where it ought to be... but it isn't. Gravity is pulling all the stars in this area inward to this spot. There should be a star here... but there isn't.

YODA
Most interesting. Gravity's silhouette remains, but the star and all its planets have disappeared. How can this be?

There is a brief pause. Then a CHILD puts its hand up. YODA nods.

JEDI CHILD JACK
Because someone erased it from the archive memory.

CHILDREN
That's right! Yes! That's what happened! Someone erased it!

JEDI CHILD MAY
If the planet blew up, the gravity would go away.

This is an especially good example of a riddle from the series and it's also very interesting that it takes padawan learners to solve the riddle.

4. It may seem that Yoda talks 'backwards', but he actually says things incorrectly in almost every way possible, even talking normally sometimes. This leads you to believe it is not cultural. One theory that is probably the best explanation thus far says that Yoda says things in this way to get people to pay attention to what he says. This theory was suggested by Ben Skywalker in Fate of the Jedi: Backlash.

How many did you get right?

4 You are George Lucas!

1 A padawan learner you are.

0 The force is weak with you.