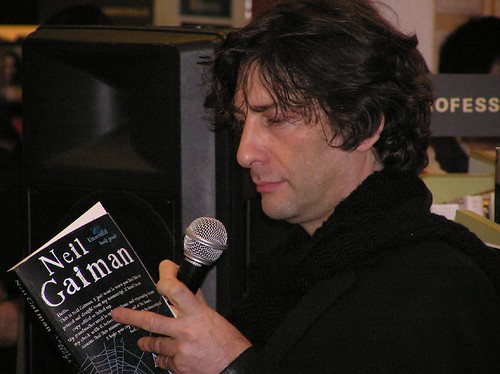 Neil Gaiman is a popular modern writer of novels, graphic novels, and short stories. He has received a large amount of awards for these works including the Carnegie and Newbery medals for the same novel, The Graveyard Book. He was born in 1960 (currently 52 years old) in Portchester, Hampshire, England. Growing up he was a bright child and learned to read and enjoy books at a very young age. Other than this his education was fairly plain. His great writing skills are the result of years of hard work and practice. One common device that can be seen throughout many of his works is riddles. Here are some of the riddles he included in some of his novels:

When there is a fire inside you i am still cold.

The answer to this riddle is a mirror. This riddle comes from his series the Books of Magic, a comic book mini-series.

Another riddle he includes in one of his works actually comes from a film he worked on, MirrorMask. This movie is about a girl who is sick of her family's life as circus performers. Her mother is hospitalized and she falls into a fantasy world. The riddle discussed in the film comes from a book entitled The Joys of Yiddish, a catalog of common phrases in Yiddish. The riddle is discussed in this book as follows:

The first riddle I ever heard, one familiar to almost every Jewish child, was propounded to me by my father: "What is it that hangs on the wall, is green, wet -- and whistles?" I knit my brow and thought and thought, and in final perplexity gave up. "A herring," said my father. "A herring," I echoed. "A herring doesn't hang on the wall!" "So hang it there." "But a herring isn't green!" I protested. "Paint it." "But a herring isn't wet." "If it's just painted it's still wet." "But -" I sputtered, summoning all my outrage, "-- a herring doesn't whistle!!" "Right, " smiled my father. "I just put that in to make it hard."

The final riddle we will discuss related to Neil is from one of his poems. Poems are a great source of riddles because they are inherently full of them. This particular poem, Instructions, is a mystical look at life; transforming a regular life journey into a magical one. Here are a few lines of the poem:

A red metal imp hangs from the green-painted
front door,
as a knocker,
do not touch it; it will bite your fingers.
Walk through the house. Take nothing. Eat
nothing.
However, if any creature tells you that it hungers,
feed it.
If it tells you that it is dirty,
clean it.
If it cries to you that it hurts,
if you can,
ease its pain.

These are part of the instructions that Neil Gaiman gives for a mystical journey. These instructions correspond to real life instructions. Basically it means that you should not disturb things, the knocker and "Take nothing. Eat nothing," unless it is warranted, i.e. it hungers or is dirty.

Neil Gaiman is a very diverse artist making novels, comics, films and more. He has achieved many of the highest literary awards and will continue to make art for years to come. For more information about Neil and his works visit his official website.

For some great riddles of your own to solve visit our hard riddles section.