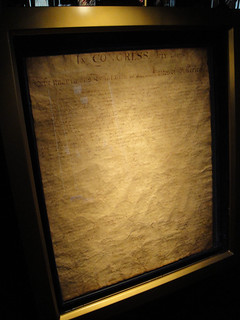 Starring Nicolas Cage, National Treasure was released in 2004. It is the story of Ben Gates and his journey to find the national treasure hidden by the Freemasons. Along his way, from the very beginning, his path is laden with difficult riddles that he must solve to find the treasure before his enemies do. When he is a kid his grandfather gives him a riddle to spark his interest in the hunt for the treasure:

The secret lies with Charlotte

Early in the movie we find out what this means. Ben goes on an expedition to the Arctic and finds a colonial ship in the ice, its name the Charlotte. On the ship they find a pipe engraved with a riddle from the Knights Templar:

Ben also solves this riddle quickly and realizes that the riddle is talking about the Declaration of Independance. 55 men signed it and Timothy Matlack was the offical scribe of the Declaration. Once he figures this out he realizes that to read the Declaration he must steal it, especially because Ian (the antagonist) plans on stealing it as well. Eventually Ben steals the Declaration and on the back he finds a cipher that acts as a key corresponding to the Silence Dogood letters written by Benjamin Franklin. The riddle derived from this is:

The vision to see the treasured past comes as the timely shadow crosses in front of the house of Pass and Stow.

The answer to this riddle is Independence Hall. It holds the Liberty Bell which was struck by John Pass and John Stow. They go to Independence Hall and find a pair of specstacles. When they look at the Declaration with the glasses it reveals a new clue:

Heere at the Wall.

As far as riddles go, this is the end of the movie. For more information about the movie visit the Wikipedia page.

To lighten things up, visit the Funny Riddles section.