Riddles of Angels and Demons 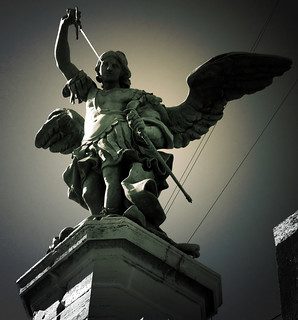 This Dan Brown novel chronicles Harvard symbologist Robert Langdon's adventures in Vatican City as he tries to stop the Illuminati from destroying the city with an antimatter bomb. He must maneuver all of the riddles they have set up to shroud themselves. The book opens just like The Da Vinci Code, with a murder. A physicist at the European Organization for Nuclear Research is found murdered with an "Illuminati" ambigram (reads the same when viewed from several directions) on his chest. This is where the antimatter bomb is stolen from; if it isn't found in 24 hours the container that the antimatter is stored in will no longer be able to sustain the antimatter and it will self-destruct. They know the bomb is in the Vatican and it is being broadcast via a security camera by the Illuminati. The Pope has recently died and the four Preferiti, the men who are most likely to take the Papal office, have all been kidnapped. Robert gains access to the Vatican Secret Archives and finds a poem by John Milton in a copy of one of Galileo's works:

From Santi's Earthly Tomb with Demons Hole,
'Cross Rome the mystic elements unfold,
The Path of Light is laid, the sacred test,
Let angels guide you on your lofty quest.

From this poem Langdon deduces that he must follow the 'Path of Illumination', a set of locations that leads to the lair of the Illuminati. Each point is marked by an angel statue. He also figures out that each of the Preferiti are going to die in a location related to earth, wind, fire and water. These clues point him to the location of the first at Santa Maria del Popolo. Here he finds the first Preferiti dead, suffocated by dirt shoved down his throat. All of the statues in the chapel are made by Raphael, but the angels are made by Bernini. One of these angels in this chapel is pointing west. The next clue he finds in Saint Peter's Square, which is west of the chapel he was just in. He realizes he is looking for the tile of the west winds because this is a metaphor for the breathe of God. When he arrives there, it is extremely busy but they are too late. The next Preferiti is dressed as a homeless man and his lungs have been punctured.

Although Langdon has not been fast enough to save the two previous Preferiti, he knows that he is close behind the assassin. Looking to the west wind Langdon must find an angel depicting fire in the direction of these winds. He cannot think of any off of the top of his head so he goes back to the archives to find a listing of all of Bernini's works. He quickly discovers that the next angel is the Ecstasy of St. Theresa in Santa Maria della Vittoria. This is a statue of St. Theresa of Avila being pierced by a flaming arrow held by an angel. When they arrive they find the cardinal alive and tied to burning pillars. They cannot save him in time with the assassin still present and attacking them.

Having failed with all of the rest of the cardinals Langdon looks in the direction of the arrow of the previous statue and quickly decides the next location will be the Fountain of the Four Rivers. He gets there before the assassin and ends up fighting him again. Just before they begin fighting the assassin throws the final chained cardinal into the fountain. Robert is overpowered by the assassin but is able to fake his own death, but still fails to save the Preferiti. The final clue to the location of the Illuminati is a dove, the angel of peace. This dove should point in the direction of the Illuminati's lair.

The final clue to the antimatter bomb comes from Camerlengo who receives a message from God that tells him that the location of the bomb is the tomb of St. Peter. Once they find the canister, they send the canister up to the heavens in a helicopter narrowly escaping death and saving the day.

For more information about this novel visit the Wikipedia page.

For some more great riddles visit our Best Riddles Section.