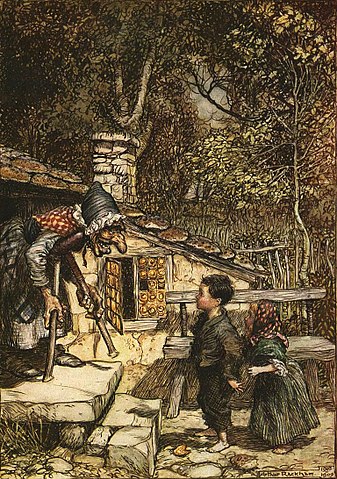 Every culture and group of people have their own folklore. Folklore is stories that are passed on from generation to generation through spoken language. For this reason folklore is the oldest form of history we have. It was also very useful before the invention of written language, allowing parents and grandparents to pass their knowledge on to their children in a memorable way. One common feature in folklore that exists in almost every society is the presence of riddles; many popular folktales contain riddles that are important to the story, and in turn, important to the societies that told them.

Folklore uses riddles for a variety of reasons such as helping characters learn a lesson and for purely entertainment value. One great example of folk tales using riddles comes from the story entitle "The Riddle", tale number 22 of the Brothers Grimm collection. This is the story of a prince who goes on a journey with his servant and ends up at a witch's house. While there, his horse is accidentally poisoned. His horse in turn poisons the bird who eats it. The prince plans to later eat the bird but it ends up getting eaten by thieves who would have otherwise robbed them. Finally he arrives at a princess who he tells he will marry as long as she can answer his riddle:

What slew none, and yet slew twelve?

Of course the princess can't answer this so she sends her maid to spy on the prince in his sleep two nights in a row. But both times it is his servant as a decoy who rips her robes off. The third night the princess comes herself and the prince is in his bed. He reveals to her the answer but he also takes her robe. The next day she knows the riddle, but she has cheated so she must marry him. In this particular folklore, riddles are used to promote the moral of the story: You must account for your wrongdoings.

Another great example of folklore and riddles comes from the bible. In the bible the Queen of Sheba visits King Solomon and wants to test his wisdom, so she asks him some 'hard questions.' There is some legend and folklore that describes what she asks him:

Whenever there is a strong gale, this thing is always at the forefront. It makes a great and bitter shout, and bows down its head as a bulrush. It is a thing lauded by the rich and wealthy, yet deplored by the poor; a thing of praise to the dead, yet strongly detested by the living. It is the happiness of birds, yet the grief of all fishes. What is it?

The king answers correctly with "Flax linen!" In this folklore riddles are used to prove one's intelligence, namely, King Solomon.

The number of riddles that can be found in folklore is numerous, riddles themselves are even considered riddles by themselves. They are a great way to create metaphors, convey a message, and prove intelligence. For some riddles of your own visit our main riddles page.